What is a Stable Isotope? 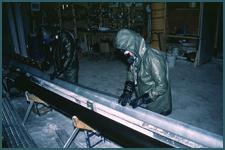 Show Caption
Isotopes are atoms of the same element that have different numbers of neutrons; that is, they have the same number of protons (positive charge) and electrons (negative charge), but differ in molecular weight due to different numbers of neutrons (neutral charge). Isotopes may be radioactive, or unstable in the natural environment and prone to decay to another state known as a daughter product, or stable. Common stable isotopes include 2H/H, 18O/16O, and 13C/12C. These isotopes occur naturally in the environment, but their natural abundance differs with different environmental conditions. For instance, the ratio of 18O to 16O in ice cores and fossil remains of microorganisms is commonly used to identify colder vs. warmer periods in the Earth’s past; higher abundances of 16O indicate warmer periods (increased evaporation), whereas higher abundances of 18O indicate cooler periods (decreased evaporation). Hence, the partitioning of isotopes between substances during reactions or processes can be used to characterize processes in the biological, geological, and hydrological realms, both past and present. This partitioning, known as isotope fractionation is governed by the principle that lighter isotopes, or those with a lower molecular weight, will be favored in evaporation processes and biological uptake, leaving the source material “heavier,” or with the heavier isotope more abundant.

How Are Stable Isotopes Used in Hydrology?

What is Stable Isotope Fractionation and What Does it Tell Us? 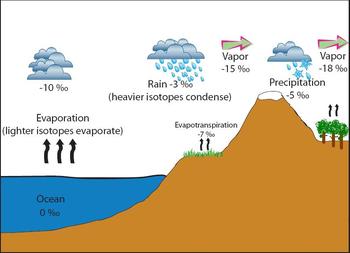 Show Caption
Stable isotope fractionation occurs naturally through evaporation/condensation. Lighter isotopes preferentially evaporate while heavier isotopes condense to form precipitation preferentially to light isotopes. This said the journey of a water molecule can be traced from its source to a given catchment based on fractionation ratios. The greater the distance between the ocean and inland storm events are, the more likely that rain will be lighter due to rain out of heavier isotopes from processes such as orographic uplift or previous storm events.

Results Analysis – How Can We Tell Where the Water is From? 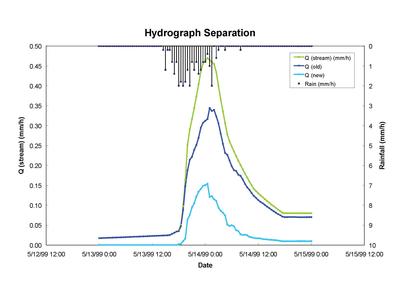 Show Caption
The stable isotope ratios in water samples can be analyzed to determine “new” water, or the water that falls directly from a storm event, from “old” water, or water that had fallen in a storm event in the past and may be stored in plants, soils, or groundwater. These ratios are represented by the notation per mil (represented with the symbol ‰) are compared with a standard, and are considered “heavy” or “enriched” (more of the heavier isotope) or “light” or “depleted” with respect to the standard. Each standard corresponds to a particular isotope or isotope pair; these standards (and their respective abbreviations) are: Ratios of heavy to light isotopes from the sample can be compared with these standards to determine if the sample is enriched or depleted relative to these standards. The degree of enrichment or depletion can indicate the source and age of the water.