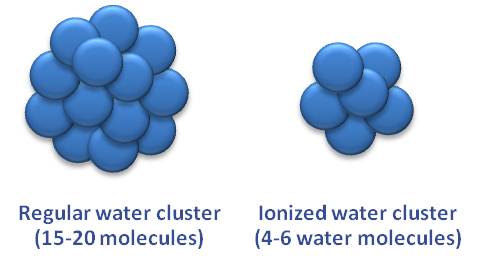 Are micro clustered water machines for real? Some brands of water ionizer claim to microcluster water molecules into hexagonal rings of six molecules. That ‘micro clustered’ water is supposed to be more hydrating than plain water, but is it? Yes, the water made by the machine is more hydrating than regular water, but not because the water molecules have been micro clustered. The water made by any alkaline water machine hydrates better because of it’s alkalinity: Alkaline water has the right pH for optimal absorption in the intestines.

Hydrogen Bonding – All water molecules cluster and break up Here’s the facts about water molecule “clusters” according to chemistry: H2O molecules attract each other through the special type of dipole-dipole interaction known as hydrogen bonding:

This means that while water molecules can cluster together, they almost immediately un-cluster. This bonding/un-bonding effect occurs so rapidly that some chemists say you could regard a container of water as one giant cluster – and is not clustered  (for a few picoseconds) But the lifetime of these theoretical clusters is so short that they have never actually been observed!

Water is always changing, self ionizing, creating bonds and then breaking them. Water molecule clusters don’t exist long enough to be a factor in body hydration, since hydration takes some time. Water molecules can bond and un-bond trillions of times per second while your drinking it!

It is because of this, that water molecule clustering is not considered a factor in human hydration. Even if a water ionizer could cause water molecules to cluster together, those molecules would uncluster before the water even left the machine.

Why does alkaline water hydrate better?

Studies have shown that alkaline water hydrates the body better than plain water, and there a couple of reasons why. First, alkaline water from a water ionizer contains alkaline minerals in hydrate form. Hydrate minerals like calcium hydroxide and magnesium hydroxide are known to chemists as osmotics. Substances that increase the rate of absorption of water through osmosis. The second reason is that many cells in the body also absorb water through aquaporins – tiny channels in the cell wall. One of these aquaporins – AQP3 – is found primarily in the intestines. AQP3 is controlled by pH. If water is acidic, AQP3 will block it. When water is alkaline, AQP3 allows water to pass into the cell.

Amazing Biology Fact! Aquaporins can admit as much as a billion water molecules into a cell per second! What is astonishing about that is that water molecules pass through aquaporins in single file! The laws of chemistry and physics make it perfectly clear, microclusters in water don’t exist for a long enough period of time for them to have any impact on your health. The benefits of alkaline water comes from the mineral hydrates in it. The Mineral hydrates it contains makes alkaline water from a water ionizer different than bottled or tap water. Tap water has mineral carbonates in it. If you have hard water, the chalky white residue it leaves are mineral carbonates. Bottled water is usually just filtered tap water, unless it was filtered by reverse osmosis, then it may contain no minerals at all. The only way to get the full benefits of alkaline water is to drink water from a water ionizer.

Drink the healthiest water on Earth. Call us today.